Usually, I like sticking to cheese that has a pretty mild/tame flavour. I’ve seen some cheeses that have blueberries, and other odd things in them. While I’m not quite at that stage of trying new things, I did want to try branching out from my usual Daiya (and now Violife) cheese and see if I could be satisfied with a wilder flavour. 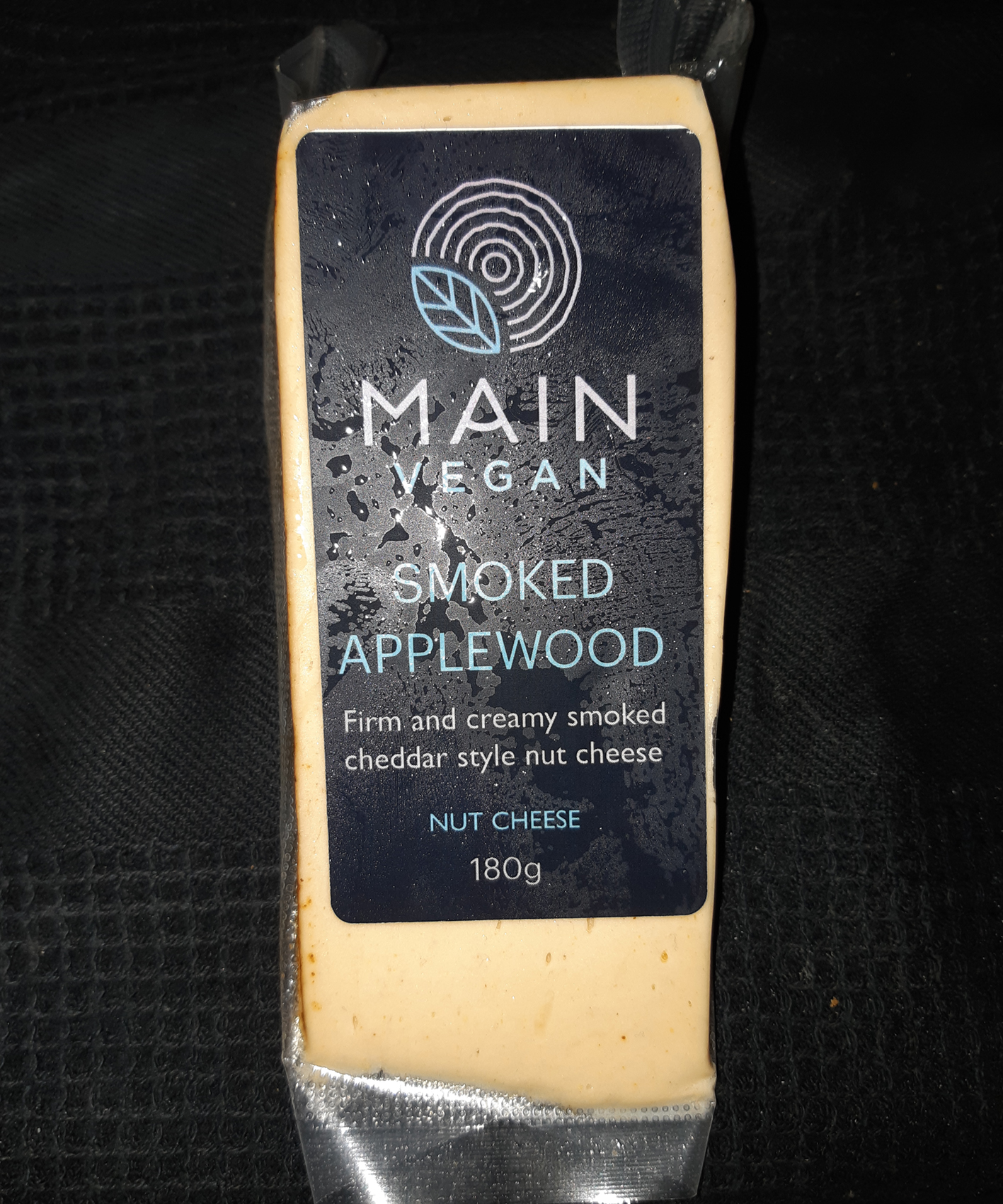 I decided to go with Main Vegan Deli because I remembered liking their cheese sample at one of the Vegandale festivals I went to, so I thought they would be a safer choice. (Instead of picking a completely new company) Also, their cheese is made out of cashews, and I haven’t tried very many cashew based cheeses, so I figured two birds.

Now, this cheese definitely has a… let’s say ‘bold’ flavour. Upon first taste test (done cold, right out of the fridge), it had the texture of soft tofu, and didn’t really have much of a taste, until you got to the red dust that was along one side. Once you got there, that’s when the flavour became apparent. It’s kind of hard to describe the flavour, but one thing I can say for sure, is that it made the back of my throat tingle after swallowing it.

I found out later, that it apparently has whisky in it, so I’m not sure if that would’ve been that flavour (I’m pretty sensitive to alcohol’s), or if it was something else, but it definitely didn’t make it fun to swallow.

That said, I had my (non-vegan) friend try it as well, and they absolutely loved it! They said, and I quote, “It’s as close as you can get without dairy. It melted the same and tasted great on burgers and sandwiches.”

I also tried it in a cold sandwich, and it was definitely better when not eating alone, although I couldn’t tell if that was because it was disguised with other flavours or not. And, it still tingled my throat. I didn’t get a chance to try it melted, although I did smell it melted, and similar to a few other things, the flavour just seemed to intensify when it was heated.

I figured since I didn’t really like the flavour, I probably wasn’t gonna like it with an intensified flavour.

While this cheese wasn’t my cup of tea, I would still say it was good, and if you’re someone who looks for bold flavoured cheeses, I’d definitely recommend you try it out!

Another good thing about this wedge, is that it was a lot bigger than I thought it’d be! It’s actually the size I thought the Violife Parm Wedge was going to be. Since I tried the Violife wedge first, I had lowered my expectations on size when I bought this one, but I have to say, I was pleasantly surprised! Especially because it was listed at $15.

If I had ended up liking the flavour, I would’ve been over the moon at how big of a wedge it came with. I ended up giving it to my friend, who was really happy with it’s size. Though they did agree with me that $15 still seemed a bit too steep. We both thought if it was closer to $10-12 it would’ve been better.

Now, I don’t want you to get the wrong idea here, when I say ‘big’, I don’t mean it was ‘big’, I mean it was bigger than the Violife wedge, but was still relatively small. The whole wedge was roughly the size of my hand.

The wedge went from the tip of my middle finger, to my wrist, making it about 6 inches long. It was also about 2 inches wide (pointer to ring finger).

Definitely not big enough to be $15 in my eyes. But! I want to say thank-you to Main Vegan Deli for not making it ridiculously small.

If their other cheeses are the same size, I definitely can’t wait to try one of their tamer flavours!

Have you tried Main Vegan Deli’s Applewood Smoked Wedge? Let me know what you think about it in the comments below!

Like this review? Check out more here! I post new reviews on the 13th of EVERY month!

Liking the blog? Sign up for my Patreon to help me keep it going, as well as get some insider exclusives – for as little as $1!